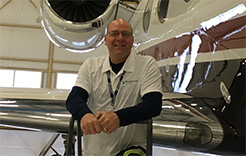 Mark leads the operations and flightline for the Westover Airport.

Westover Airport. Ready for your arrival.

For over 40 years, Westover Airport has made landing safer, easier, and less costly. Located in western Massachusetts near Springfield, we’re close to the Mass Turnpike (I-90) and other major highways. It’s easy to get to cities like Boston, Providence, and New York, as well as top area attractions.

Our airport has a long and colorful past. Established by President Franklin D. Roosevelt as an Army Air Corps Base, Westover has played a key strategic role in our nation’s defense, from World War II to Iraq and Afghanistan. Westover has also provided air transportation of humanitarian relief supplies and workers to countries throughout the world.

In 1974, the base was realigned as a joint-use civilian/military airfield. Today, Westover operates as an FAA Certified Class 1 Air Carrier Airport serving large aircraft including public and private charters. Under a joint use agreement with the U.S. Air Force, we offer pilots and passengers alike the highest level of safety and security.